The game I’m currently playing illustrates why some anime has trouble reining in it’s scope and thus turning their stories into mush. I paraphrase the following somewhat:

Mystery Voice: What do you want?
Lead Character: I want to know who you are.
Mystery Voice: I am The Will of the Universe
Me: Hmm, I wonder if that’s a full time job or if he has to deliver pizzas at night…

A little while ago coworker stopped by my office and related a tale of his son telling him how to use a Wii. He stated his aggravation and then bluntly stated that he ‘hated video games’.

Of course I thought it odd that someone would hate the whole idea. The way I see it, electronic entertainment is the one genre where art in a real, creative sense happens. No one walks around stating ‘I hate paintings’ though one would be more justified now than at any point in mankind’s existence for thinking such a thing.

It’s much the same with the rest of contemporary art:

Music?
Apart from a handful of unknown musicians mostly of the European club music variety, ‘poppie’ type stuff is a stale photocopy of the stuff put out twenty years ago.

Theater?
You mean crap like this that is based off of thirty year old pop tunes? And that’s the good stuff!

Cinema?
With a few exceptions, movie houses have it particularly hard since the stuff either seems to be art house type bilge that pushes the limit on self absorption or stock footage of explosions.

Hopefully it can be seen why, due to the overall lack of art in our culture today, it grieves me when someone throws the whole video game genre out.

Along those lines one of the best examples of art in video games in the Medal Gear Solid series. This is a series of games that, despite it’s flaws, makes me feel sad that the games’ niche appeal mean that comparatively few will be able to take in their artistic flair.

I picked this game up on a whim for $7 from Gamestop. I was vaguely familiar with the series, that it had this guy named Snake Plissken who is tasked with stopping a nuclear armed super tank that goes by the moniker Metal Gear. I was hesitant about buying the game in the past since I HATE sneaking games. Every other stealth game I had played (Ghost Recon comes to mind), have been about ‘move character around level, if spotted repeat’; and if ‘if spotted’ is even in the last .5 seconds of the level, then sorry about your luck. However I had found MGS 2 to be quite enjoyable in terms of game play right off the bat. The radar tells where enemies are and what they see, and even getting spotted doesn’t mean the end of the world to those who are quick of feet or packing a pile of ammo.

I’ve yet to decide if not playing any previous Metal Gear games robbed the story of some of its impact. I wouldn’t think so since so few characters from the past games (including to some extent the lead) are brought forward into this game; it’s essentially a remake of sorts. Unfortunately that gives a bloated story very little to stand on and the game makes VERY generous use of expository dialog, something I found out that MGS games are notorious for. If the dialog led anywhere it might be bearable, but plot points are flushed on a whim in a story that felt like it was written as the game was being made. For example, I had to hear the main antagonist repeatedly say “everything is going exactly as planned”, even after I had wiped out his strike team and uncovered his secret base. “Well” I thought “I guess I shouldn’t have shown up all!”. Add into that mix some unfair fights toward the end that were divorced from all sense and the game left some room for improvement. However, where it has failings in game play, it has some decent success as a cinematic feat for an early PS2 title with several blocks where the game are watched (in well rendered cut scenes) as much as it is played (if that).

Unlike myself, Kid Sandmich was a big fan of MGS2. He loved the open ended game play and variety of weapons (two of the games great strengths). Wanting to see what was behind the hype I picked up MGS3 for him and watched him play through it several times (that’s right, I didn’t actually ‘play’ it).

This was an amazing game: a gritty cold war tale with a little bit of 60s era James Bond spice thrown in for good measure. Set as a prequel to all other MGS games, it’s unburdened from convoluted plots from the other games and can put together a story that actually makes sense in one of the finest looking games put out for the PS2.

The final fights are much more fair than MGS2, though a trip to Gamefaqs was in the offing for a few. Two minor quibbles I had with the game is that it’s retro health repair process was perhaps a little over ambitious and the lead character’s relationship with the final boss was, without giving too much away, odd. Much of the oddity was explained in the dynamite closing minutes, but I don’t think anyone but the game’s creator would try to pull that off.

I also want to point out that although MGS2 had some beautiful moments itself, the cinematic qualities of MGS3 made me genuinely sad that it’s artistic brilliance wouldn’t be seen beyond a small subset gamers, to say nothing of the soundtrack which features one of the best video game tracks of all time. 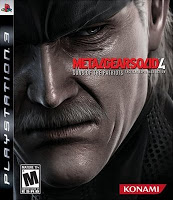 It’s difficult to say enough good things about this game, though I will say that it doesn’t stand on its own very well. Being the last in the series, every character from the previous games is either brought in or referenced in the story line. I was familiar enough with the story to kind’a know some of the references, but I still felt like I should have played through everything from the old Nintendo games up to Metal Gear Solid 1.

The game play is solid and the artwork fantastic, definitely an instance where the developer was given enough time to ‘paint in the corners’. For instance, one of the little things I noticed late in the game was a cable run in the ceiling of a battle ship. The ‘run’ plays no part in the game play (it’s in a cutscene*) and the game wouldn’t have been any weaker without it; but it was still there, meaning that someone put a bit of time into putting something into the game that 99% of people wouldn’t have noticed if it was missing**.

Like the other MGS games, the game is realistic enough to be involving, but seems to know right where to let up in order to keep in fun. For example, the game allows for a wide array of realistic weapon customizations, but still allows Snake to walk around with enough armament to take down a third world country. There are so many ways to take down and not take down enemies that every encounter feels fresh, even after playing through it a few times.

The cinematics, which have augmented or replaced the typical MGS expository dialog, are lush and easily rival any big screen presentation. However with a game that has hours (and hours) of dialog, it’s begging for something that doesn’t yet really exist in the video game world: an editor. There are several awkward scenes that were begging to be cut and blocks of dialog waiting to be truncated.

That in and of itself is only a slight blemish on an otherwise solid game, but the game does have a peculiar technical issue that aggravated me quite a bit. Both myself and Kid Sandmich have logins on the PS3 where we can save our own save games. If we were both in the same area, which was rare, there wasn’t a problem, but most of the time getting into the game required a two minute load that probably involved cached artwork for the active level. I kind of wish the game had some options around this (like load on demand or allow for dumping it all on the hard drive); but I guess since the game rings in at like 40GB*** (not coming to your 8GB Xbox360 anytime soon) they didn’t want to burden the PS3 hard drive anymore than they had to.

*Like Dynasty Warriors 6, all the cutscenes are ‘in-engine’
**The obsession with the realistic weapon models and the battleship in particular might also be a reflection of the apparent sometime Japanese artistic obsession with (comparatively) modern military equipment.

***When starting a new MGS4 game it drops you into the middle of a TV show that’s essentially a setup for a futuristic ad. It’s all HD so the quality will never come off right over the web, but the best of these shows is Bomb Shelter Buffet, which I cannot resist mentioning:

Local super cop Jim Simone bagged his fifth scumbag this past week to lauds and criticisms from the usual corners. Let’s see if you can guess the races of the following two columnists who have generated much noise!

That’s not what we get with Simone. He’s a career police officer, who’s reportedly always wanted to be in the middle of the action. He’s wanted to protect. He’s someone who has consistently evidenced a willingness to die serving a dying city.

So now this is the thanks he gets for stopping a resistant bank robber. He is denigrated as a serial murderer and a bully. It would seem a bit more fitting, however, that we recognize his valor and thank him for his proven willingness to make the ultimate sacrifice.

If anyone else gunned down five people, we’d call him a serial killer.

You would be absolutely right if you guessed that the first is written by a well grounded black guy who is sick of the crime and victimhood plaguing the black community and that the second is written by a white, self-righteous woman who is an adherent of liberal group-think that preaches to rubbing yourself with spices to make yourself tastier for the evil doers of the planet. One more quote from #2:

They don’t hand out death sentences. That’s not their job.

Well dammit, it should be someone’s job and Officer Simone seems do be doing a fine job of it.