[2020 addendum: I watched my son playing this game on a computer and the two things that irked me in my PS3 (constant loading screens, and the “crowded controller” issue) didn’t exist.  Also not highlighted in my review is how much fun the game was with it’s various glitches and how much fun it was overall.  I added another ‘star’, the three star rating was crazy low for what is one of the greatest video games of all time.] 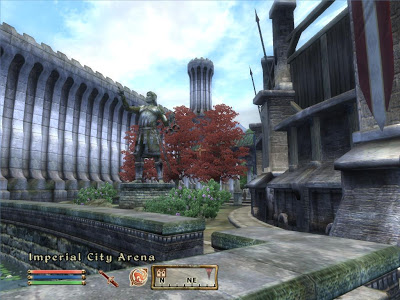 First off, this game is amazing looking. True to its word when it first came out, this game is amazing just to walk around in and look at. This game is also HUGE, it was many, many hours before I finally made my way to the last city that I hadn’t seen. Every door in the game can be entered, all NPCs have dialog and it’s also worth mentioning the numerous dungeons, some of which I’ll probably never find.

After a certain point though, the game’s size and plot progression (the main plot line is boring and thankfully optional) start to work against it, in fact I’ve come to believe that the lack of focus (“what do I do next?”) is directly related to the size. In an effort to create an entire open-ended alternate world, the developers ran into the paradigms that make much of the real world boring and very similar in appearance. After all, how different does your house look from your neighbor’s? How many different animals do you see on your way to work? I know from my past vacation that I had the same conversation with three different groups of people, which I didn’t mind since I like the sound of my own voice, but there’s no such benefit in a video game when carrying on conversations with ‘non-player characters’.

So needless to say a few hours into the game I had seen 95% of the monsters that I was going to see in the game, NPC dialog became repetitive, and the hundreds of houses started to look the same. An emphasis is put on dungeon crawling for grinding, but even with what I think was a heroic effort on the part of the developers, a hole in the ground can only be made to be so exciting and different from other holes in the ground.

I’m not trying to take too much away from the impressive size and scope of the project which has a girth that must be seen to be believed, and I’ve long dreamt of a tolken-esque game of this magnitude, but…

For as much as it excels there’s also something very staid with the whole exercise. The game feels more like a checklist for old role play gamers than something new and original. I couldn’t put my finger on it until I saw this trailer for the upcoming Final Fantasy. The trailer is amazing looking, and otherworldly. Oblivion on the other hand features content that rehashes ideas and settings that have been around for decades. I’ll admit that this is mostly a taste issue as many people find the whole concept of Japanese role playing games unpalatable and that may be a large reason for Oblivion’s western oriented, Dungeons & Dragons themed success.