I’ve thought that, perhaps there might be something to salvage from our train wreck of our current civilization, but also figured that if art comes under assault that will be a sure sign that the totalitarian boot is coming down upon our face. Unfortunately, that’s where we’re at.

It’s interesting since artists tend to be self-infatuated individualists and thus natural allies of the highly narcissistic left, but like the autistic Libertarians on the right they feed the beast which will consume them. No longer will they be able to freely make any sort of art that they’d like, but only art that comports to the style guide put out by the U.S. politburo. A recent mild example is in comparing the concept art from the video game Horizon Zero Dawn with an in-game character:

Now I will admit that I’m cherry picking to a degree, but the concept art for the characters from this tribe were all like the one on the left: Caucasian with hints of Eskimo and East Asia. In the game though it was, as I put it, like a group of random people snagged off of a New York subway platform. The issue here is that the initial art had a definitive message for how the game might flow, but instead there’s an awkwardness in that black characters are supposed to add something “black” but are supposed to act just like the white characters, or not, it’s never clear what’s going on there. It was obvious from any time spent in the game that such a societal structure wouldn’t last a month, let alone the thousand or so years that it supposedly persisted. This isn’t any different from much of the media today which is exchanging the inspiring and original with the tedious and banal.

So then it would seem that artists would generally favor a society that enjoys more artistic freedom rather than less, but, they realize that much too late.

Of course the more distressing act today is the outright wanton destruction of art. Anyone halfway attentive will note that this only breaks one way. In the continuing slow motion genocide of whites (this is not an overstatement) it obviously goes that the markers of their civilization must be destroyed. The statues, books, movies, churches, and paintings must fall to the sword of the fanatics that rule over us. In short, all the art has to go, everything from cereal box mascots to God have come under attack from our pedophile-satanist rulers and their useful idiots.

Where does that leave artists then? For a clue they should look to the Soviet Union or Communist China (which in our case are probably optimistic scenarios in terms of art, and probably much else). On first glance some of this statist art does have a certain glam to it, but it’s the same (or variations thereof) year after year, decade after decade. And that’s the good stuff, below the surface of the “workers murals” and sharp cut Lenin statues is…nothing. It’s just rows of gray apartment blocks, entertainment whose only goal is to glorify the current oligarchy and their views, and news organs that only parrot press releases from the inner party.

Art will be dead and artists who can still find employment will be anything but. This saddens me since I’m a fan of art generally, but it’s also easy to see why the proletariat in oppressive societies felt that the artists generally got what they had coming to them.

Years ago, back when the company I worked for contracted in security guards, there was older (think 90) guy who bragged that he recycled deodorant dispensers by gluing a photo to the dispenser. He would wheel the bottom of the deodorant container and the picture would come out of the top as if on a cheap, jerky elevator and I would say something thoughtful like “uh huh…”. His was a typical case of an untalented folk artist resorting to a desperate medium in order to differentiate himself from people who actually had talent of some sort.

On the other end of the scale you have Itchiku Kubota whose work is currently featured at the Cultural Center for the Arts in Canton, Ohio. Mr. Kubota’s area of expertise was creating exquisite kimonos: 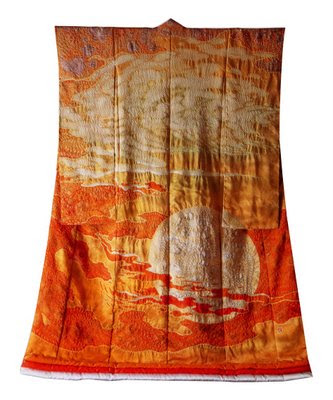 The kimonos as created were never meant to be worn, but just admired for the artist’s handiwork. My first thought was that Mr. Kubota was only seeking to differentiate himself from other artists by working with an unusual medium; some kind of Japanese folk art on ‘roids. The exhibit itself proves otherwise. Rather than just reusing known techniques in some unusual way, he sought to push art forward by engineering new techniques and applying them in a unique way.

His ‘seasons’ set (i.e. Symphony of Light) which is featured in Canton is truly one of a kind. As an example, although the winter themed kimonos could have been a walk in the park, Mr. Kubota was sure to put as much time into them as the more colorfully ornate sets in the series, complete with empty trees and silver highlights. This attention to ‘painting in the corners’ is a staple of all of his pieces.

In addition to the show, the museum is also putting on a slice of fake Japan with some dances and a $20 a serving ‘Lipton’ green tea ceremony. 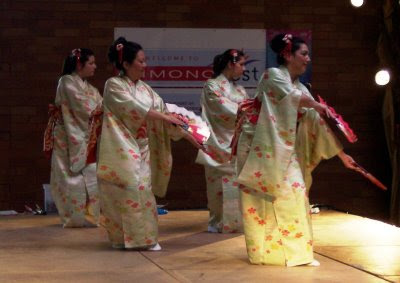 Don’t make me guess the province it’s from, as it probably doesn’t exist.

In Canton (yes, Canton) until April 26th, after that you’re going to have to take a twelve hour flight to see them.