Looking for a picture of the American flag: 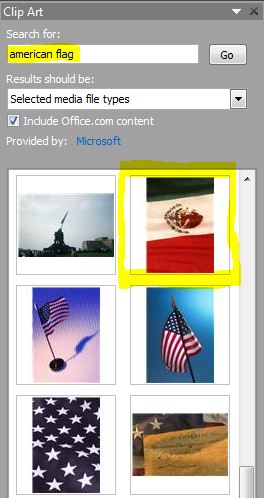 Nothing (NOTHING) fries my bacon worse than the handling of immigration by our elites.  Nothing destroys the character of a nation faster and depresses wages worse than what they’re doing right now.  The fact that they need to make what they’re doing even worse is bad governance on steroids.

I can understand some lefties to an extent since many of them hate America and would love to import people until it is properly destroyed.  However, even with lefties I’m puzzled since it would seem like they would want to defend the big government that they purport to love instead of saddling it with higher costs while further endangering the environment that they (supposedly) seek to conserve.

In the case of the Republicans, idiocy abounds from every corner of their ill thought out plans:

With the passage out of the Senate committee of their ‘reform’ bill (that’s actually nothing of the sort) I messaged the people in Congress that represent me (well, supposedly…).  The law was bad enough to begin with, but then Orin Hatch found that he could only support it if it sold out the middle class via H1-B in addition to low skilled labor.  Rob Portman (RINO-OH) replied back with a nauseous, vapid spool of text that I feel must be picked apart:

Our immigration system is broken and is in need of reform.

And what exactly is broken about it? In Portman’s mind, I’m guessing what is broken is that we have any immigration system at all. What’s actually broken is that laws go unenforced while the ones that are enforced do things like set Islamic terrorists up with free school/food/housing, etc.

America is a nation of immigrants, and immigrants have enriched our great country.

This is feel-good nonsense and revisionism. America is a nation of settlers, and immigration has been a mixed bag. To the extent that it has been a success, the fools in Washington aren’t making any effort to figure out what worked and what didn’t.

We are also a nation of laws, and those laws must be enforced. It is the federal government’s duty to enforce our immigration laws at the border and in the interior, to stop illegal entry of those who seek to harm us.

And? Well? Is the Federal government incapable of performing this or is it just unwilling. How will a new law solve this?

We need effective immigration regulations that will uphold our laws while continuing to bestow the privilege of American citizenship to those who pursue it through legal means.

How allowing people who have gamed the system to jump ahead of those who are playing by the rules is supposed to make sense then I don’t know. It seems like at a minimum that a nation would favor immigrants who, you know, trouble themselves to not break the law as a matter of course.

We must never forget that the United States owes its solid foundation to the hard work of generations of legal immigrants. We are strengthened by being a nation of immigrants. This means that we should keep the doors of America open to those who come legally and enrich our society and contribute to our economic prosperity.

I doubt that even made sense to the person who wrote it. Proof for your assertion? None needed when it’s PC boilerplate.

We should continue to welcome innovative entrepreneurs and skilled workers, as these men and women fuel our nation’s economy by creating jobs, and promoting new technologies and ideas here in the United States.

In other words: have fun getting your wage diluted Mr. Sandmich, we don’t like you anyway.  How about an American economy fueled by Americans?  Is that too much to ask for?

Ali was one of seven Minneapolis-area Somali men killed over a 10-month period, and authorities believe all were killed by fellow Somalis.

Somalis killing each other? Who would have been able to see that coming?