Over the weekend our pet rabbit passed away from causes unknown. 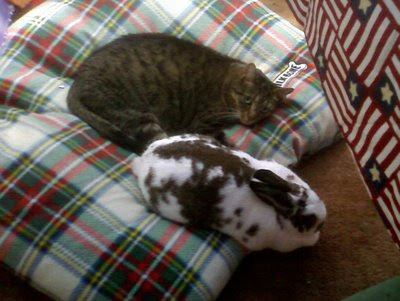 Cotton with one of her puss cat buddies

Rabbits don’t have quite the depth of character of a cat or dog. Cotton made up for this fact by being a ‘grumpy bunny’. The only time she let people pet her was when she was out of food and she had more than enough attitude to charge any forty pound pooches that began sniffing her a little too enthusiastically. Cotton was an exception, yet owning a rabbit educated me to the fact that a rabbit has no real natural defenses and that rabbits in general exist as fresh meat stores for a planet of predators (and bizarrely, rabbits seem resigned to that fact). Mrs. Sandmich was very upset at Cotton’s passing, but I was happy that we were able to give her rabbit a good home and a long life (for a rabbit). When we picked a baby Cotton up from her litter around nine years ago her mother was already pregnant with another litter; I tend to doubt that many of Cotton’s brothers and sisters had it as nice as her.

One of my last memories (that I retain) from living at my parents was my mom acquiring a Siamese kitten. From what I recall, my mom had a soft spot for the naughty cats from the movie Lady and the Tramp and she had mentioned several times that she’d like to get a Siamese cat. Still, I was mildly surprised when I got back from my factory job at around 11:30 at night back in 1991 to find a pretty kitty exploring his new digs. 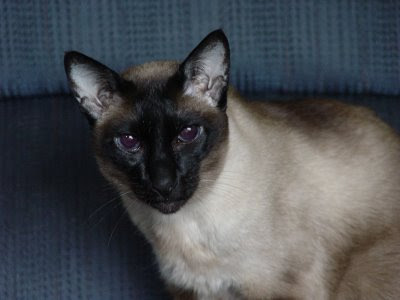 Unlike my cats who mob visitors so that they can get attention, ‘New Moon’ was strictly a mama’s boy. If my mom wasn’t out and about, he was missing and if my mom’s bedroom door was closed at five in the morning he would cry until he was let in. My mom took great care of him and fed him food that’s so good that my cats won’t touch it. It sucks to lose such a dear pet, but eighteen years? A lot of people don’t get to live that long; a great run for a great cat.