I haven’t done a lot of video game reviews because I haven’t played a lot of games where there’s been something left unsaid. I actually went on a bit of a binge the first part of the year and have played several games.

I didn’t do a write-up on Uncharted 2 since it’s awesomeness has already been broadcast across the net (though it’s excellent co-op multiplayer doesn’t get the attention it deserves).

Kid Sandmich and myself then also bought a batch of four games of varying quality (mostly good).

One was Dead Space, which is very well done, but I only played through about half of it before losing interest (I began spending too much time saying to myself “Yeah, I get it, stuff popping out of shadows, then shoot, shoot, shoot”). Artwork, sound, gameplay, all top notch though if that’s your bag.

We also picked up Bayonetta which is one of the (if not THE) sexiest, most stylish games I’ve ever played. It’s racy at times (the tightly clothed female protagonist dancing around a pole to move a platform elicited a chuckle from me. “What?” asked our exchange student; “Oh nothing”, I said), but it must be pointed out that it’s attention to style is so methodical that I was left wondering at times if the game was made with gay fashion designers in mind. Great game with great controls, just not great enough to make me forget about it’s cousin Devil May Cry.

Another binge purchase in the batch was Fallout, whose add-on material that came with the game confirmed that, at least for someone of my age, the game gets by A LOT on nostalgia: imagining you’re Mad Max roving the post apocalyptic countryside, towns, and cities. Since the add-ons lacked that feel (one took place on an alien space station), the rather generic RPG shooter mechanic shown through. The game was good, not great, but definitely all the better for ‘duck and roll’ retro fans (just be sure to save the game for every ten feet that you walk, apparently the apocalyptic future has time freezing issues…).

The last game though I think needs a more thorough revisiting… 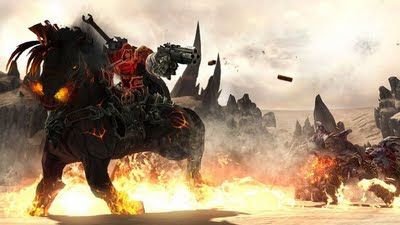 Darksiders is an interesting game. As it was pointed out when it was released it wanted to have the gore/grind of God of War with the goodies a Zelda type of game. The efforts to pigeon-hole the game largely succeeded in my mind before I had even played it, and the extensive demo that released didn’t do the game any favors as upon playing it I was struck by what wasn’t stated in any of the reviews and was left unsaid by the demo: the unbelievable quality of the title.

The game’s publisher, THQ, is notorious for half making games. It’s latest big budget effort Homefront carries the reviews of a typical THQ game: canned shooter mechanic, much promise, and not enough delivery. Without the apparent muscle of EA or Activision it seems like THQ has a hard time pulling titles all the way across the finish line, which is what makes Darksiders all the more surprising.

The sound and music are the best that any AAA title can offer. The artwork effort was so detailed that even Mrs. Sandmich took notice of a particular piece of finished art on what would ordinarily be a piece of overlooked ground:

Her: “What does that do?”
Me: “Nothing.”
Her: “Really? That circular art looks like should do something.”

But alas no, the artists couldn’t seem to let one detail of this game escape their overproductive claws, leading to a game that’s thick with atmosphere. Every ‘place’ feels like a place, and not a production set and every sprite (chairs, statues, lamps, etc), feels like they had been left there by their previous owners.

With tight controls, a nice storyline, and memorable characters in a largish game to boot, it’s quite obvious that some ingenious producer pulled one over on THQ in getting a game of this quality out of the studio (that, or the producer was a tyrant that worked his people to death).

Four and half stars, with a half star taken off for some inventory control issues late in the game, and the occasional (though rare) aggravating bug.