[2020 addendum: Recently my son and I played back through the HD remake of RE5. We couldn’t figure it out what changed, but the challenge mode isn’t as much fun as it was in the old version and it’s sad to note, but the overdone brown tones of the original game did not age well in the update. Still a great game, but it is a slight bit a creature of it’s time.]

After teaming up with Kid Sandmich on Monsters, I’ve been on the prowl for two player co-op games. Co-op games as of late have become quite popular, despite the development challenges of coding for an AI partner for when a human co-op player is unavailable. If you’ve been wondering about the dearth of postings, look no further than the two reasons below: 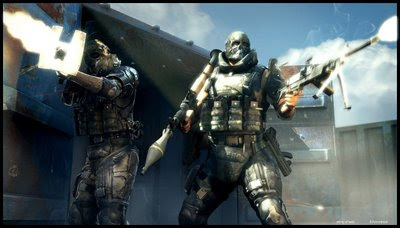 This game features a cheesy meatfest plot that feels like it could have walked off the screen of an eighties action flick. The two players must first shoot lots of Muslims (including suicide bombers that accost the pair) and then (predictably) evil military contractors. I was waiting to be offended by PC sentiment through the game that would make up for their earlier transgressions, but I thought the story in particular was quite sympathetic to the regular military, contrasting it to the “do anything for a buck” private contractors within the game.

Artwork was fantastic and the gameplay nicely balanced between sniping and up close ammo fests. The only disappointing gameplay aspect was that although the game was easier when the two players actually cooperated it was nearly as effective to just run through the maps while laying on the trigger. The game also features some nice set pieces including an escape from a sinking aircraft carrier and a hurricane ravaged city.

As icing on the cake, there are also two additional free scenarios available for download which helps out what would otherwise be an overly brief experience. 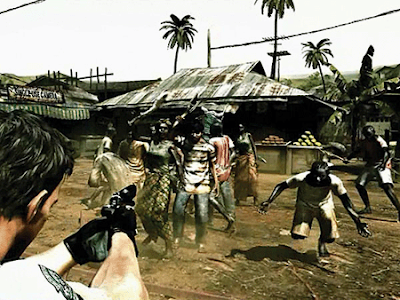 With a limited inventory it’s up to the two players to cleanly split up the duties as they present themselves. This is simple enough in the beginning as most of the time both players have a whole lot of nothing with maybe a whole clip of ammo between the two. At about the halfway point it becomes more complicated and Kid Sandmich and myself found ourselves spending RPG-esque amounts of time balancing the inventory. Although misconfigured inventories could cause failures, needless deaths were most often the result of one or both of the players forgetting it was a team game and getting punished heavily for the oversight.

Most of this game is purely a matter of taste, but there’s something for everyone. There’s a nice story that relies on cannon but is easily accessible to those unfamiliar with the games (like myself) and a grimy art style that religiously recreates a generic West African hell-hole within intricate, involving maps. Gameplay includes everything from tense moments of running from chainsaw wielding maniacs to combating giant bosses with super weapons to (after beating the game) infinite ammo killfests. It’s this lack of focus that most detractors hold against the game, but it’s a rare feat to try and make a game all things to all people and succeed as well as this game does.