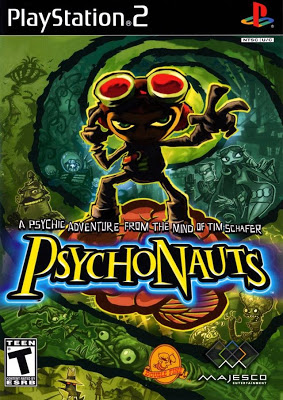 One would think that video games would be immune to ‘critic pump’ like many other mediums. For example I remember looking at reviews in the back of Rolling Stone back when I was in high school and I learned pretty quick that if the reviewer gave a music album five stars it was probably unlistenable bilge. Unfortunately video games are another art medium and as such are susceptible to the same faults. For example there’s one game that reviewers constantly chide gamers over not buying, but it’s a game that just doesn’t look very fun (though I confess to judging the book by it’s cover).

Another game that’s a sore spot for video game reviewers is Psychonauts. Developed by Tim Schafer, whose largest claim to fame is developing the original Monkey Island, the game shows promise but can never seem to escape the mediocre gameplay that glues the package together.

When I first started playing the game I ran into two technical faults that were somewhat beyond the foresight of the developers. The first is that the game runs too slowly to play under the PS3’s PS2 emulator. There’s some other games that do this, but oddly graphics power hogs like Final Fantasy XII and God of War II have no issues (maybe a reliance on some PS1 hardware functionality within the PS2? I kinda doubt it, but…). The other technical issue is that the artwork for the game was often too dark, and I mean too dark to see anything. A lot of games of that time didn’t come with a gamma correct, but many did (though the examples that come to mind are all from flat panel obsessed Japan). My hope at the time would be that the game would reward me for squinting at the screen while tethered to my PS2 via the controller cable.

It started out well enough. It was clear from the onset that the game had clever writing, memorable (if a bit generic) characters and a mildly unique art style. Once the gameplay started in earnest annoyances started to surface. Several of the ‘super powers’ had an intentional delay to keep them from being too ‘super’ and targeting enemies was iffy (a kind of hybrid auto-target that always seemed to target the wrong enemy). Later in the game when you’re sporting a bevy of super powers there’s no easy way to access them if you find the need to switch between them rapidly.

On top of that the inconsistent platforming and different-though-similar areas made the game start to feel more like a Spyro game that was put out for the original PlayStation*. The ever mounting number of collectibles seemed more like padding and busy work than actual game play elements (unlike Jak 3 which dared players to see if they had the mad skills to get the collectibles). The art and platforming elements also got old and I couldn’t escape the feeling that everything Tim Schafer was trying to do had been done better in the game Alice** (which looks better and was released five years before Psychonauts).

Another nagging fault included a health system that feels half play tested. You can carry health power ups but only three at a time, my first thought was that the damage dealt should have been modified so that there wasn’t one more piece of crap that you had to carry around. If you did happen to ‘die’ a certain number of times in a level you were kicked out of the level, and when you went back in you were…right back where you were when you were kicked out. What was that supposed to accomplish besides punishing players with the omnipresent extended load screen?

Towards the end of my playthrough I began to feel cheated. It’s one thing to waste two hours sitting through what’s supposed to be a great movie that’s actually a dud, but quite another to log 20+ hours into a very well reviewed, dog of game. Well that’s not fair, the game itself is OK, but nowhere near the quality of its hype. I must admit though that I got about 70% of the way through the game before deciding that it was a royal waste of my time and I was unable to force myself to play another minute of it***.

*Original 3D PlayStation games exhibited the same ‘wonky’, Tim Burton-esque art style though unintentionally due to the very limited capabilities of the hardware. I’d read somewhere that the PS1 didn’t actually support floating point math, which I find hard to believe, but I can’t find a corroborating source.

**American McGee’s Alice is an odd duck of game. I wanted to dislike it’s whacked out art for whacked out art’s sake, but the final weapon and the closing cut scene make the game worth sitting through.

***The whole experience reminded me of Grim Fandango, which happens to be another Tim Schafer game