Okee-Dookee. Our first destination that would probably be of interest to outside interests was Hiroshima. I had a desire to visit there when I found out it wasn’t too terribly far from Tokushima. When I tried to suggest it, I learned that it was already a planned destination. In hindsight, though, I don’t know if it was scheduled primarily for a historical visit, or for food and fun. I’ll start with the heavy issues, but whenever I hear the name Hiroshima from now on, I’ll think of the lighter things it has to offer. It isn’t fair that a city that has so much to offer gets pigeon holed as ‘that nuked city’. 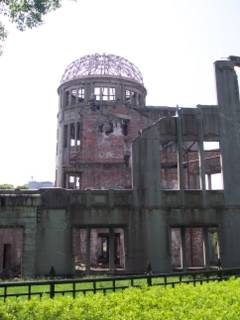 Although Mr. Kendall was well familiar with the Hiroshima Dome, I hadn’t heard of it until I did some web searching prior to our visit. It’s rather heavy (spiritually), with the rubble still in the same place on the ground from where the bomb had blown it free. Understandably, it’s seen a lot of reinforcement operations to keep it standing in its familiar state. A huge (especially for Japan) tract of land is set aside where there’s a rather large park and the extremely affordable Peace Museum. 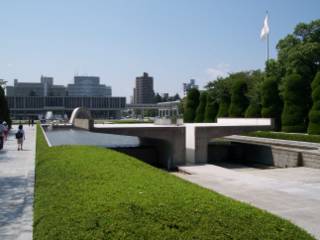 The eternal flame. The museum is at the end of the walk.

Inside the Peace Museum is where the rubber hits the road as far as the Japanese perspective on this historical event. The museum had a cool audio device that would give the English (or a dozen other languages) language translations of the presentations. Needless to say, listening to America bashing and left wing gobbledygook got old real quick, and the thing hung dead around my neck through most of the museum walk through.

Although there weren’t any blatant lies, there seemed to be several sins of omission. Primarily, it seemed as if the U.S. decision to use the bomb was made in a vacuum. Much was made of the secret Hyde Park agreement between Churchill and Roosevelt, but it failed to point out various reasons for such a decision then, and its later irrelevance when Roosevelt was dead at the time when the decision to drop the bomb was made. I may not have been paying attention, but not one battle was mentioned in the lead up to the bombing, and much was made of Japan’s (apparent) weakness at the time.

My buddy mentioned that much arm twisting had gotten the Japanese to acknowledge the Korean and Chinese forced laborers who died in the bombing. Of course, either by poor translation or intentional sloppiness, one would get the impression that the evil Americans had killed these innocent slaves who happened to find themselves working in Japan.

There was also the B.S. quip towards the end about how wars never solve anything, etc.

The only problem with all this is, I can’t heavily fault the Japanese for the tone of the museum. The war certainly didn’t solve anything for the people who were burned to charcoal on the streets of Hiroshima. Sure the Japanese could admit that they were more nasty than they let on, but in their mind, it’s irrelevant to the issue at hand. I’m sure the question they’d pose is “How much less nasty could we have been to avoid such a fate?” This, of course, gets into the various reasons for the war to begin with. 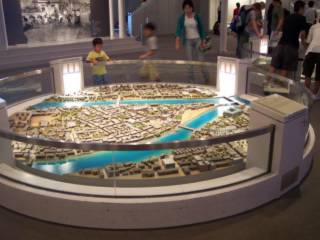 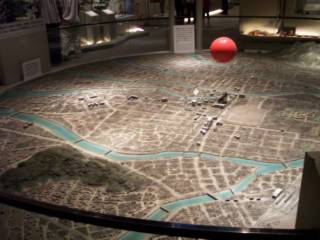 After
As well, I got an uneasy feeling at the museum. The mantra told to me in school was that more people died in the firebombing campaigns of WW2, but as my buddy pointed out this was one bomb, and a nasty one at that. Also taught to me in school, were the various good things brought about the bombing, especially the saved American and Japanese lives. However, such facts could be used as a justification for any horrible weapon. The American military could have just as easily dropped chemical weapons on population centers in an effort to bring about peace. “But Sandmich” you say “the Japanese had chemical weapons too, and then it would have been okay for them to use it on us”. Well then, was the Japanese lack of nuclear capability the only thing that made using the bomb ‘correct’?

It was also, at least in my mind, a dangerous gamble. Mr. Kendall pointed out to me that the heads of the Japanese military didn’t want to surrender even then, and only the intersession of the emperor brought about peace. What if Japan didn’t surrender? What if they decided to use some nasty weapons of their own? Would people anywhere tolerate more nuclear bombing runs?

If I was Truman, I don’t know if I would’ve made the same call. In hindsight though, it would appear the correct decision was made; war is unavoidably nasty. No doubt if the U.S. didn’t use the Bomb, and pictures continued to come back of American dead stacked up on Japanese beaches, Americans would be furious that we didn’t use our super weapon to put an end to the horror. As well, though the museum preaches the peace mantra now, it would’ve been more helpful if they did that before Pearl Harbor, it’s all to easy to puke that stuff up now. 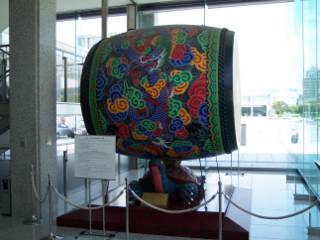 A turtle with a huge drum on his back, inside the museum 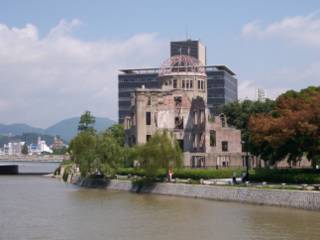