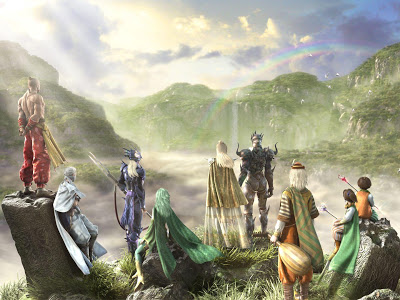 I had originally dug into this game on the 2005 Gameboy Advance version. The story was amazingly strong for such a small package and I was enjoying it immensely. Unfortunately about a third of the way through the game I got cocky and wound up blowing a couple hours worth of gaming by going into a dungeon my characters weren’t ready for. Even at the time I knew better and that I should save before going off the story’s rail, but with that big scoop of game having to be replayed I put the game down and waited to forget what it was that I was doing so that the adventure would be new again.

Fortunately the wait (of several years) paid off with this re-release that Kid Sandmich got me for Christmas. It features a snazzy opening much like the re-done Final Fantasy III and artwork that’s even a hair better than FF3. The most shocking improvement, however, was when the game hit a cutscene and instead of being subtitled with text it was a fully voiced in-engine cutscene, a first for me on the DS!

In this iteration they did away with the grating job system from ‘III’ and opted instead to integrate that system into the story with each character holding to a set job. This change added to the depth and eliminated the ‘double grind’ issue with other FF titles that are job based (having to grind up the character level as well as a job which will probably turn out to be a dead end). Another big improvement is a crude ‘auto’ system decreases the pain of grinding by allowing for a rough level of automation. In fact, on the final dungeon I was able to grind up my characters past level 80 without much effort (level 60 is the bare minimum needed to beat the game).

Almost more than any other Final Fantasy game that I’ve played, this game dishes out brutal punishment for those who haven’t explored every nook and cranny of the map. Skipping through the game and holding exclusively to the story will leave characters at too low of a level, and valuable goodies that make the game much more manageable will be left at the wayside (there were a few points where Kid Sandmich ran into trouble and I’d find out that he hadn’t been to the semi-secret dungeon of WhatzIt to acquire some secret weapon). However, the most grating aspect of this game is that towards the end magic became increasingly useless, making the game a by the books hack and slash. If you wanted a healing spell in a fight you’d have to start casting it early in the match because the long charge time meant that by the time you needed it you’d already be good as dead.

I love the effort put behind this title and it’s turned out very nice, but still, the original (GBA version) game was pretty good, so although it was an enjoyable improvement the developers didn’t have quite the hump to overcome in putting this game together as they did for Final Fantasy III to make it playable to modern audiences.

As an aside this will be the last retro FF game that I play before the release of Final Fantasy XIII early (hopefully) next year. I tried to play through ‘V’ but I determined early on that it was pretty much the same game as FFIII.