This post by Justin encouraged me to finally get around to posting the pic below. It’s of the contents of a claw machine game located at a local dive, and I was struck as I walked by that they had what appeared to be toys of the Japanese Doraemon character. Upon further inspection these were shown to be cheap knockoffs labeled ‘Care Bears’: 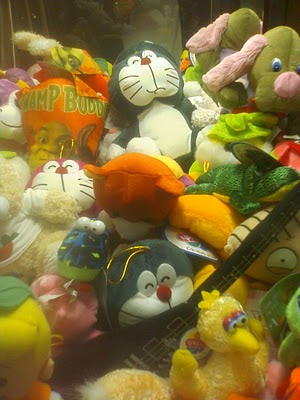 Interesting that they also have a red one that seems to look like the knockoff Doraemon somewhat illegally used by the FCC*.

* Why the FCC (or any number of other governmental regulatory agencies for that matter) has a ‘Kids Zone’ is beyond me; but no matter as I believe there is ‘no controlling legal authority’ on the control of the Doraemon character in the U.S.